Welcome to the Battlestar Augustus!Edit 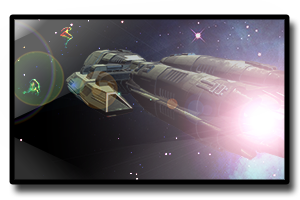 It has been only a matter of a month since the Cylon Attack on the Colonies. Those that remain alive are scattering to the winds or being crushed under the rule of the Cylons. Those that escaped have set their course, this includes the nearly completely retired Battlestar Augustus.

Once one of the ships of the line, now the Augustus has been rebuilt with nothing more than scrape and parts salvaged from other ships. Though a far call from her glory days, she is now something different, a home for those who have lost theirs. With a crew made up of Colonial Fleet personnel, civilians, and whoever else has washed up, the odds are long of any shot of survival.

But all is not lost, far from it. As long as she has a star to set her course by the crew of the Augustus are not about to give up, not about to go quietly into the night.

And that star is Kobol, the mythical origin of all human life. A new home for those who remain and a link to a long forgotten history.

Battlestar Augustus is an online Roleplaying Forum set in the Battlestar Galactica universe, primarily focused on the version of events seen in the 2003 reimagined series. As with many roleplaying groups before us, our story is a sort of novel, written by the various players who control their individual characters. All facilitated and in some ways provoked by the Game Master, hereafter referred to as the GM. The story is broken up into individual episodes and beyond that, each episode is made up of a number of individual threads on the forum. The episodes, as with most TV shows, contain some self-contained plots, and some plots that will continue from episode to episode, allowing for a detailed character exploration if the writer so chooses. It is the role of the GM to consolidate the various storylines of each character into some semblance of a cohesive whole, as well as it is the role of each player to work within the main plot to both further their own unique storylines of character exploration and the overall plot of the episode.

The episodes of Battlestar Augustus can take anything from six months tow well over a year to reach completion depending on both the writer's involvement with the overall story and their drive to develop and write each individual episode. While as greater brush strokes of the episode may be planned out from the episodes inception, it is the details that make the beast and often the story will change as new developments happen. Thus it is impossible to directly predict or control for these kinds of things and stories may turn out in wholly unexpected ways. This means that there is no script to follow in the storyline, though if a writer does get stuck they may of course request some ideas from both the GM and the group as a whole.

We are a highly literate group, with a 150 words minimum posting requirement, and minimum response time to all the threads you are active in within 7 days. We look forward to hearing from highly motivated individuals should you be interested in contributing to our story!

This means no one under the age of 18 may join. If you are under 17 you might as well leave now, there are plenty of other roleplay out there that would love to have you as part of their crew. You have been warned.

Retrieved from "https://battlestar-augustus.fandom.com/wiki/Battlestar_Augustus_Wiki?oldid=102"
Community content is available under CC-BY-SA unless otherwise noted.